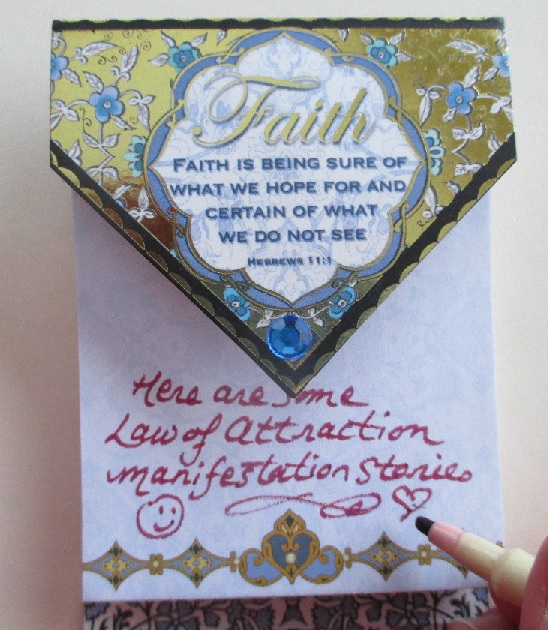 Someone once recommended that when I actually have law of attraction manifestation stories or a personal “manifesting testimonial,” that I should log them into a little notebook.

I didn’t do that at first, and now I’m sorry I didn’t. As I begin to think back on a few of the things I’ve actually manifested (or, “demonstrated,” as Ernest Holmes of “The Science of Mind” puts it) it occurs to me that it would be a really good idea to actually write down my successes. The reason I think it IS a good idea is that whenever I might feel a little “down” or as though something isn’t happening as quickly as I’d like, I can glance over my notes about when I DID manifest something, and gain that good feeling of encouragement and faith again.

Now, rather than just write down what it was we are manifesting, I think it’s also wise to write down the feelings we have along the way in the process – for example, “Just before I manifested (whatever it was), I felt a great sense of peace – like, ‘YEAH! It really IS already done!’” – and then we can re-visit that feeling quickly, and get ourselves back on track.

I’ll have a number of law of attraction tips here at the site – after all, we’re all about self-fulfillment and personal transformation here, and my goal is to give you every single helpful thought that comes out of my head.

For now, here are a few law of attraction stories for your reading pleasure! 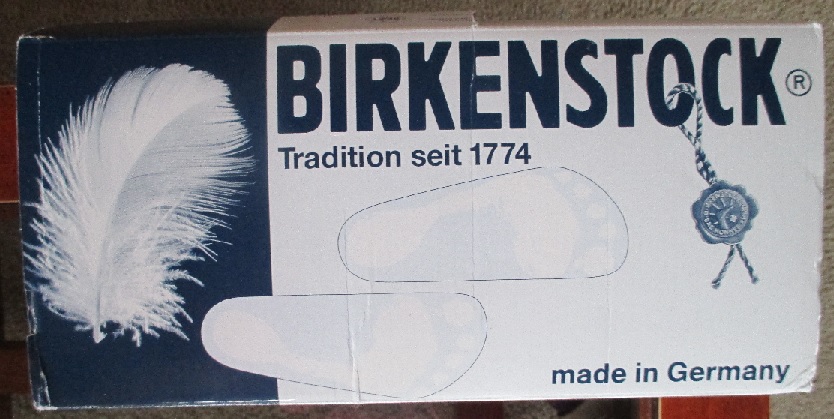 I honestly don’t recall what made me decide to manifest a white feather, but it was probably shortly after I had first seen the movie, “The Secret.”

I’m pretty sure it was my birthday, and I was out on a walk in the woods. I distinctly remember thinking, “Ok, I’m going to manifest a white feather. How hard can that be?” So, I began to picture the feather. I also started looking on the ground, in the trees, etc.

No feather. But, I wasn’t discouraged. I figured, “Well, after all, I am new at this whole law of attraction manifestation thing.”

I continued concentrating on how I was already in possession of this white feather, and worked on aligning my vibration (you hear about “aligning your vibration” a lot when reading anything from Abraham Hicks, by the way) to the “place” of “already having” the feather.

After a while, I decided to just let it go – and I released the whole thing. I released the desire, the idea of looking for it… everything. I just said to myself, “I’ve got that white feather.” And I continued my walk.

After dinner, John gave me a package. (You already know where this is going, don’t you?) In it was a pair of brand new Birkenstocks – my favorite style (The “Arizona”) – and what do you suppose is the first thing I saw when I opened the wrapping paper? 🙂 Yup! The “white feather!” Right there on the Birkenstock box!

THAT gave me chills. I remembered reading how we’re not supposed to try to figure out the “HOW” of receiving that which we ask for. That’s part of the whole “subconscious mind” and ITS you’re your subconscious mind is the part of the Universal Consciousness/Subconscious that determines the “HOW.”

So, that small manifestation was the start of it. 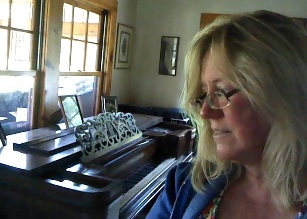 Since moving in to my current home back in 2000, I wanted a piano. Not just any piano. I kept saying that I wanted a GRAND piano.

Now, the house is small, and frankly, it really isn’t suitable for a grand piano, but that did not stop me from wanting one.

There was also the issue of cost. Grand pianos aren’t cheap, and I wasn’t earning a lot of money. So, I settled for a nice little spinet that we got from a couple in a neighboring town.

And, I enjoyed that little piano for a long time! Nonetheless, I still had this idea of a grand piano, which would face out to the mountain view.

Anyway, about 2 years ago, some really good friends of ours bought a house here in my town. The home was a summer residence for a woman who is a pianist; however, it may be that she is no longer able to come to town for the summer (she is fairly elderly). She left her piano behind with the house, along with the stipulation that if my friends didn’t want it, it should be donated to the town, if they wanted it. If they did not want it, our friends could do with it what they wished.

This is not an ordinary piano. It is a vintage (1852) SQUARE GRAND PIANO. So, it’s not a “grand piano” in the shape that you and I are used to. When closed, it looks more like the top of a pool table than a piano. It is an actual square grand piano!

Anyway… (Again, you know where this is headed, don’t you!) our friends didn’t want it, but they knew I enjoyed playing piano. They offered it to me as a gift.

As you can see from the photo, it looks rather lovely in my rather small dining/living room… But, there ya have it! I can now say I have a “grand piano.” When I play it, I can look out the window, and out through the front porch, I can see the mountain view.

Ok… One more law of attraction story for you…

The Most Beautiful Scarf 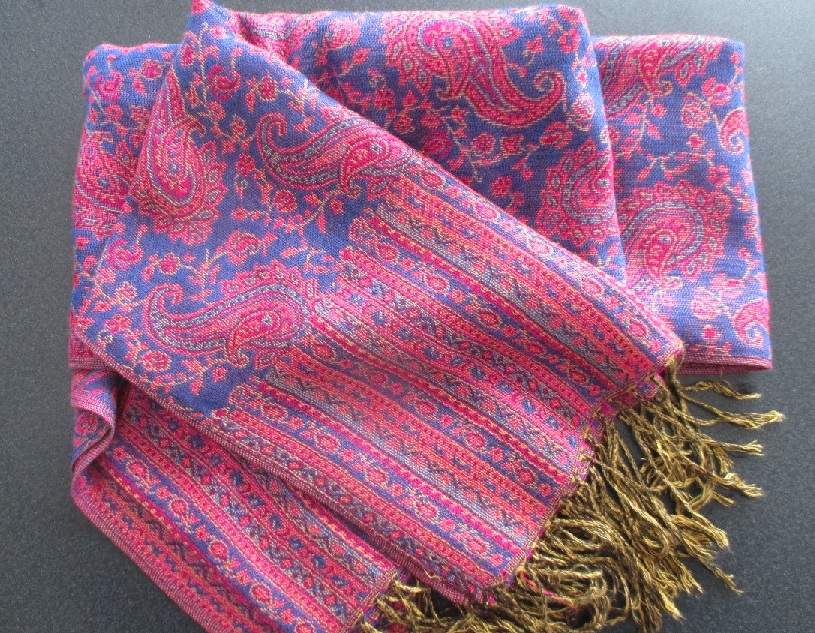 Just last month, I was getting ready to head down to Nashville, Tennessee for a conference with some of my mentors. Now, since I work from home, it’s been a long time since I’ve needed anything other than sweat pants to work in. My clothes have gotten pretty ratty, but, since I am unconcerned about fashion, I sort of let myself “go.”

I realized I couldn’t show up at the conference in the clothes I have, so, along with a few nice outfits, I also bought a lovely grey jacket so that I had something to wear other than a cruddy sweatshirt on the plane.

The trip was wonderful, and as soon as I got home, we were getting ready for Thanksgiving. In preparation for hosting the holiday, John & I went out shopping, and it was REALLY cold. Far colder than is typical in New Hampshire in November.

I wore my lovely new jacket; however, I was caught off guard with the bitter temperatures, and realized that because the neck of the jacket dipped into a fashionable “V,” cold air was rushing in, and my neck and chest were getting very uncomfortable.  I quickly realized that this particular jacket is more for “fashion” than warmth! 🙂

I told John, “You know what I would love, and what would look really pretty? A beautiful scarf – a nice long, cushy scarf – but beautiful – that would go perfectly with grey.” I had a picture in my mind of the perfect scarf.

Something with deep colors, and a beautiful print. But not any ol’ scarf that you can get in Wal-Mart. I had the image of a very stylish scarf…

Well, I said, “I’ll get the perfect scarf for this!” I was VERY definite about this. In the meantime, I picked up a quick $5 piece of fleece at Wal-Mart to at least close the gap.

So, just last week, some friends of ours who live on a sailboat in the Mediterranean came to town for their annual visit. They leave their sailboat in Turkey while they visit. We’ve missed them these last few years because we’ve been away for the winter by the time they get here.

Anyway, just the other night we went over to their house for dinner, and just as we were getting ready to leave, our friend, said, “Oh, Kathy! I have something for you!! I saw this in Turkey before we left and thought of you!”

She gave me a gift, and when I opened it, this most beautiful scarf was inside. It is unlike any other scarf you can get “just anywhere,” and it matches the grey coat EXACTLY as I pictured. See the photo. This brought tears to my eyes. Why my friend thought of me and this particular scarf… I don’t know. But it is almost exactly the scarf I had in mind. Wow…

As Lester Levenson (originator of the Sedona Method) might say, “demonstrations” is what we are having, rather than the word “manifestations.”

There is a part in one of the Lester Levenson books  where he says something like, “It’s just as easy to demonstrate $100 as it is to demonstrate 1 penny.” I have often pondered this.(I think the book is Happiness is Free and It’s Easier than You Think)

Since originally writing this page, I have had countless more demonstrations. One biggie is that I’ve “demonstrated” living in a beautiful 3-bedroom/3-bath oceanfront condo for the last several winters for a fraction of what it costs others. I still need to describe that – as well as a few other ones since then.

There are more – some SEEM more significant than others at the time of the original manifestation; however, I’ve also recently been made aware that an effort I put into something 5 years ago is panning out NOW.

What seems to be a common thread in my demonstrations that I’m noticing is a certain “detachment” from any specific outcome. That’s why I mention Lester Levenson above. He was REALLY adamant that we need to “let go” of attachments.

In fact, that’s pretty much the basis of the Sedona Method to begin with (I believe he originally called it “Holistic Releasing”). John, my husband is most closely aligned with Lester’s teachings than almost any other that I’ve brought home.

This idea of “letting go” of expectations and wants and needs is an important common thread in every teacher’s methods. We’ll be talking more and more about all this as time goes by.

I’m aware that this page has gotten long, and so I think that going forward, I’ll do my best to create shorter “posts” (versus “pages”) here at the site when a cool manifestation shows up! Thanks for sticking with me! This site has long been a real “passion project” for me, and almost like a journal for me to blurt out stuff.

BTW: So, how about you? Do YOU have any law of attraction stories or personal manifestation experiences to share? Feel free to share them at our CASedge.com Facebook Page here!