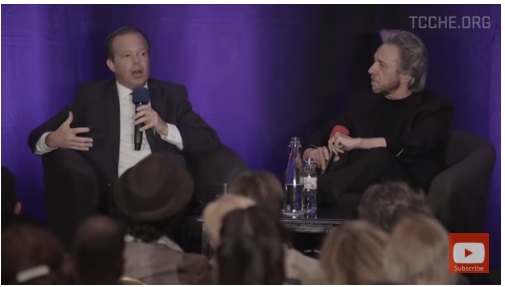 After reading an “old” (2007) book by Gregg Braden, “The Divine Matrix,” it became instantly clear why Gregg and Joe Dispenza appear together at events, and are such a good fit for each other. It’s amazing how their beliefs and explanations of how we can create positive change in our own and collective worlds compliment each other.

I just felt like I had to post something about both Joe and Gregg, because if you are on a journey that’s even remotely similar to mine (i.e. to live a fully content and abundant life while correctly using our conscious and subconscious minds in cooperation with the universal field that holds unlimited potential), you may want to explore the work of both teachers.

Frankly, I am finding their teachings to be nothing short of life changing. I don’t know how else to put it. In a future post, I will share a manifestation that I experienced last summer that I struggle to even put into words. Hopefully I’ll get that written soon.

My Introduction to Joe Dispenza

In the fall of 2017 I read Joe’s book, “Becoming Supernatural.” Prior to that, I had read his book, “Breaking the Habit of Being Yourself.” For some reason, the way he presents his theories and teaches his meditations strikes just the right chord with me.

Just as Dr. Michael Bernard Beckwith’s sincere and heart-felt explanations of how to create powerful visions for a better life resonated with me shortly after I had seen him appear in “The Secret” (2006), the work of Joe Dispenza and Gregg Braden have equally moved me.

I love the way things come to me!

It’s always kind of interesting to me how certain material finds its way into my life. For example, back when I was just beginning on this path, I happened upon Paramahansa Yogananda’s “Autobiography of a Yogi.”

While I was intrigued (especially by the way the guru’s eyes seemed to “follow” me from the cover of his book), and yet I didn’t purchase it at the time.

Then I saw it again at another store, but still didn’t buy it.

Finally, during a visit to a used book store in Portland, ME, I found myself in the metaphysical section. On the bottom shelf were about a dozen copies of Autobiography of a Yogi.

I chuckled slightly at the sight, and thought to myself, “What are you trying to tell me Swamiji?” And then – I kid you not – at that very moment, very gently a paperback copy of the book just fell off the shelf at my feet.

You can’t make this type of stuff up! Laughing out loud, I said “Ok, sir! You win! I’ll read your book!”

To this day, Autobiography of a Yogi travels with me whenever I move for the season. I’ve read it at least 3 times, and refer to it often! I took the lessons offered by Self Realization Fellowship, and learned a great deal, and the book completely changed the way I look at life.

I did not take Kriya initiation, however, because I felt that I needed to continue learning other traditions. But, the teachings of Yogananda stay with me and are deeply important to me.

Back to Joe Dispenza

In the case of Joe Dispenza’s work, I can’t recall the exact moment I heard of him; however, I have a vague recollection of seeing him on the old movie “What the Bleep Do We Know!?” a 2004 film that I honestly didn’t really like that much, but watched because it featured Fred Alan Wolf, a Ph.D. whose appearance and presence I enjoyed in The Secret.

Until I saw Joe in a later YouTube video or blog, I didn’t even make the connection immediately. Nonetheless, once I began paying attention to some of the stuff he was talking about, I found myself getting more and more interested in what he had to say.

That’s when I purchased Breaking the Habit of Being Yourself and followed the 4 weeks of his suggested meditations.

Then, the next year, I bought Becoming Supernatural and THAT is when I had yet another in one of my lifelong series of Ah Ha moments.

What about Gregg Braden?

I had definitely heard of Gregg Braden; however, I never read any of his materials until this past month. Sifting through a tote of books at a yard sale in Florida a couple of months ago, one book kind of fell to the side.

It was “The Divine Matrix” by Gregg Braden. I hadn’t heard of it, and almost pushed it aside, but then something told me to pick it up.

I put it aside for a while until a couple of weeks ago when suddenly I felt the urge to read it.

While I find certain concepts difficult to understand (i.e. the theory that we live in a “holographic universe”), others settle right into my brain like an old familiar friend.

And it was while I was reading that I began to see parallels between what Gregg described in 2007 (when the book was originally published) and what I’m learning from Joe Dispenza today.

Joe and Gregg – A Natural Fit

It also occurred to me that lately I’ve been seeing the two of these guys appearing in a variety of events and seminars. It seems to be a natural fit.

It’s almost as if these guys have been tag-teaming through the last decade or two on some unconscious level. The tagline on Gregg’s website, “Bridging Science, Spirituality, and the Real World” pretty much sums it up, and matches Joe’s work perfectly.

Both men are compassionate, as well as passionate about the messages they are teaching. I would love to attend one of their workshops – hopefully they will appear together in my region at some point.

Anyway, as a result of my reading Greg’s book, I have re-started Becoming Supernatural for the 2nd time around. THIS time, even more stuff is becoming clear. I have a feeling I’ll be writing more about this.

Before I sign off, I wanted to share a video I found on YouTube that you might enjoy, so that you can see first hand how Joe and Gregg seem to have complimentary teachings. It may help clarify some stuff for you as it did for me.

Ok, here’s the video. Now I want to go sit with Becoming Supernatural again for a while! Enjoy!